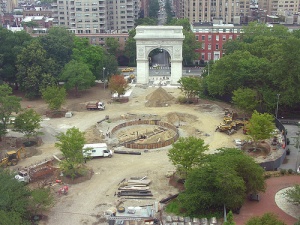 During Controversial Washington Square Park Redesign, This Came to Light — From the WSP Blog Archive

It was allegedly about “aligning” the Washington Square Park fountain to the Arch at Fifth Avenue, and so, after 137 years in its original location, the Bloomberg Administration controversially deigned – despite community opposition – to move the famous fountain 22 feet east. It was contentious, many/most did not want the move, liking the lack of symmetry, seeing it as fine as it was, and thereby no reason for disrupting it. In fact, the fountain, by design, was intentionally placed in the exact center of the park on its east-west axis. That’s symmetry! (The right kind.) The Bloomberg Administration was determined and insisted (wrongly. basically lied) that it would not cost anything more to do so, proceeded despite the opposition, unwilling to work with the community.

The redesign of this park took place from late 2007 to 2014 (technically, the reconstruction of the sidewalks was part of the plan, and only completed in the last year).

A look back at what was later revealed via this WSP Blog post from October 21st, 2011:

I’ve written here about the problems and certainly the delays on Washington Square Park’s redesign over the last few years. Now it has been confirmed that the stalled work on Phase II, halted for six weeks now, is due to a dispute between the city’s Parks Department and the contractor, Tucci Equipment Rental Corporation. Anthony Martucci, the head of Tucci, says that the Parks Department has not paid him a large sum he is owed and is cutting payment amounts for work for which costs were approved in advance by the city agency.

In an email to Parks Commissioner Adrian Benepe, Community Board representatives, City Council members, and select press this week, Martucci says that he agreed to a “gag order” after speaking out last fall about problems at the park (see this post from September 2010 for some details of the problems at that time). He says he came to an agreement at that time with the Parks Department and the relationship was relatively harmonious for awhile. That harmony ended at some point earlier this year.

In his email, Martucci outlines some significant pieces of information. Perhaps the one of most interest relates to the aligning of the fountain with the Arch.

A little history of WSP Blog coverage on this topic — I wrote about this possible misalignment in August 2008 and also after a reader, Steve, commented in August 2009, as follows:

Is anyone ever going to admit that the fountain is now aligned to nothing — not the center of the park as it was before, not the arch and not 5th Avenue? What was the point of moving it?!?!?! It is NOT aligned to either the arch or the avenue.

The Bloomberg Administration’s grand “vision” for Washington Square Park included moving the Fountain from its historic location to a new placement 22 feet east so it would align with the Arch at Fifth Avenue. Pretty much no one agreed with this change in location but the administration would not be deterred.

The fountain had been in its previous location – which was the actual CENTER OF THE PARK – since 1871; over 137 years, until Mayor Michael Bloomberg became in charge.

In 2007, community activist Jonathan Greenberg hired a company to assess the costs of moving the Fountain and presented the findings to Council Member Alan Gerson. The company’s assessment was that it would cost at least $500,000 to move the Fountain. Gerson queried the Parks Department about this and the agency insisted there was no additional cost involved and the former Council Member took them at their word. It was one last try, after ongoing attempts to persevere by the community, to get the fountain location move stopped, as even the Landmarks Preservation Commission caved to Bloomberg’s wishes (and tactics).

So Tucci did some investigating, found out the center of the fountain was actually 4 ft out from the center. This threw all the designers dimensions off, and Parks knew it but didn’t tell Tucci because they didn’t want to let the public know.

When Tucci exposed this, Parks to protect them self was going to default Tucci from the project.

That is one reason the chess plaza was stalled last year — remember when a tree was in the way of the planned curb? It seemed at the time like a small error which the Parks Department and contractor could not come to an agreement on how to resolve. Actually it was due to a BIGGER ERROR – the mis-aligning of the Fountain. (And, as we know, other errors have caused casualties such as the repeatedly dying trees around the fountain — young trees which replaced perfectly healthy 40 year old trees in the original location.)

What else has this thrown off?

Does this just confirm that, after all, the famous Washington Square Park Fountain could have been left in its well-liked and historic original location as the “mid-point” of the park?

* Wouldn’t it be ironic if – after everything – the Washington Square Park Fountain was still off-center to the Arch? August 7, 2008

Washington Square Park Blog has been providing content like this for over 11 years. There is a large archive of history relating to this iconic park. Consider making a donation to support this work today.

2 thoughts on “Flashback: Contractor Confirms Washington Square Fountain is not “Aligned” with Park’s Arch After All #FBF”