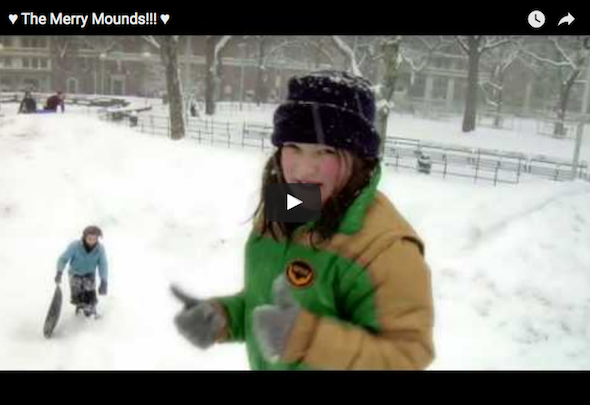 A must watch! This video highlights the ebullience of kids sledding and frolicking in the snow on the old Mounds at Washington Square Park in December 2008 before they were remodeled. Set to Karen Carpenter’s “Sleigh Ride,” it illustrates perfectly how the structures functioned as a place of spontaneous play.

The new “Mounds” only exist within the park due to local activists who fought for their inclusion in the re-design, with the assistance of former City Council Member Alan Gerson. And they are a big hit! They are definitely different: they are shorter (the old Mounds were 6 feet tall; the new version was supposed to match in height – but does not) and not conducive to sledding. There was talk at one point of bringing in “temporary sledding structures” but no mention of that recently. The new version is also covered in artificial turf.

Look at the low fences around the park! That caught my attention most when I last watched the video. You can see parts of the park were under construction in the background.

This video was produced by Matt Davis whose forthcoming film, “SQUARE: Straightening out Washington Square Park,” documents what went on behind-the-scenes within the community around the contentious redesign of the beloved park.

It is ironic that the new Mounds, which the Bloomberg Administration Parks Department and re-designer George Vellonakis so did not want in the park, are so popular.

This is what I wrote about this video and the old Mounds in 2013 as the new “Mounds” were set to debut:

The “new” “Mounds” are covered in bright green artificial turf and surrounded by “cable-net play.” No more sledding! A group of community activists worked very hard to keep the “Mounds” in the redesign plans (they were not originally) and succeeded with the assistance of former Council Member Alan Gerson. Community Board 2 was given a role of oversight of the redesign’s “details” via the Washington Square Park Task Force – but let this body lapse after Phase I opened. Alas, the Mounds are not six feet tall and look nothing like the original Mounds. Whether they will have elements of “spontaneous play” remains to be seen.