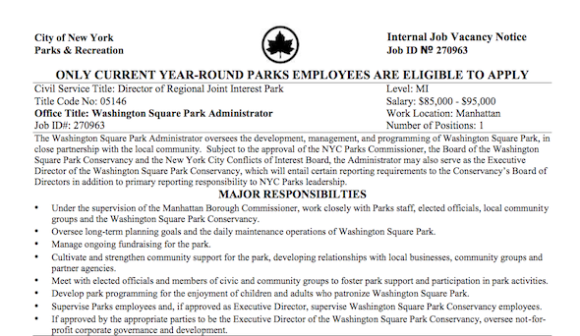 When Rebecca Ferguson left her position as Washington Square Park administrator in 2012, it took nine months for the city’s Parks Department to fill the job, – which is a really long time. It was later revealed the reason why: Manhattan Parks Commission Bill Castro conspired with four affluent women behind closed doors to create a private organization to administer the park. Castro’s secret maneuvering delayed the appointment of a new administrator of the park until this new private “conservancy” was established.

The Washington Square Park community had voted down every attempt to install a private conservancy at Washington Square Park for over the preceding 12 years. So Castro made sure that it was put together and institutionalized in a very hush-hush manner — a process approved by higher ups in the Bloomberg Administration’s Parks Department, which included then Parks Commissioner Adrian Benepe.

Emails discovered by this blog show that Castro, a paid public employee, had coached these wealthy women to hide the truth about what they were up to. When they finally came before Community Board 2 in June of 2013 for “approval,” they repeated their mantra of wanting to make the Greenwich Village park “safe, clean and beautiful.” They went out of their way to misrepresent their intentions to the public, evaded questions and omitted information that did not fit their agenda. (Documents and emails obtained by this blog showed this quite clearly.)

The person who was eventually hired for the job after the long wait: Sarah Neilson, who already worked for the Parks Department in the Capital Projects division. She assumed the role of park administrator – a position paid for by public taxes — and, in a first for the park, she also took on a “dual role,” in March of 2013, as executive director of Washington Square Park Conservancy, a newly-formed private group, which its founder, Elizabeth Ely, said aimed to be just a “little friends [of the park] group.” Neilson was the person who fronted this switch from public oversight and accountability by the Parks Department to a growing private decision-making apparatus. Now, just three-and-a-half years later, Nielson has surprisingly left and her position, which is to be filled shortly; interviews are being held now — WITHOUT ANY PUBLIC NOTICE ON THE PARKS DEPARTMENT’S WEBSITE.

MORE THAN A TEMPEST IN A TEAPOT

To be clear: Washington Square Park has never been privatized like its neighbors to the north (Union Square Park, Madison Square Park, Bryant Park) and that is entirely due to pushback from the community, which recognized the privatization schemes would inevitably change their beloved park: change in usage, commercialized interests gaining sway, limited access to the public, corporate and real estate interests taking hold, non-stop programming, lack of transparency and accountability, etc.

In situations at other privatized parks (Wash Sq Park is not privatized – so far), employees who have the “dual role” work for parks with “license agreements” with the city to run and manage the parks. The Washington Square Park Conservancy has no such thing (although FOIL documents obtained by this blog showed they initially intended to obtain a license agreement – which they backtracked on, later saying they had no such plans, despite emails discussing this. They were not beyond not being forthcoming before local Community Board 2 – and the C.B. allowed them to get away with this).

The need for this “dual role” at Washington Square Park has always been suspect – see my post about this here – as has the need for a private conservancy.

Back to the hiring process: Around the time this private self-dubbed “little friends group” was under scrutiny for its role in the initial booting of the hot dog vendors (public pressure later reversed this decision), NYC Park Advocates revealed that conservancy founder Elizabeth “Betsey” Ely played a key role in the hiring of Sarah Neilson back in 2012-2013.

If that isn’t dodgy enough – the 2012 job posting did not indicate that there was a “dual role” situation here or any connection with a private group. It was only once people were being interviewed that they were informed, and, during the interviews, some were surprised at how large a role Elizabeth Ely played in asking the questions. The Parks Department/Bill Castro kept this information from the public and on the QT. (How do they get away with this?)

Trouble on the way? Conservancy mentioned way too much in 2016 Park Admin job description

The Parks Department is currently interviewing candidates for the job of Washington Square Park Administrator. Sarah Neilson’s last day on the job was November 4th.

This time around, the job posting is quite descriptive – in ways that signal trouble. The last time the job was posted in 2012, it was an open posting — anyone could apply. This time, the job was only opened up to existing Parks Department employees (and I can’t figure out if that is better, or not).

In 2012-2013, the focus for the Park Administrator was to: “oversee long-term planning goals and daily maintenance operations of Washington Square Park.”

This time, 2016: “the development, management, and programming of Washington Square Park.”

And then lots about working with the Washington Square Park Conservancy and overseeing employees.

Again, Washington Square Park Conservancy does NOT run or manage Washington Square Park – but clearly that is the role they are building up to. FOIL documents uncovered by this blog showed emails discussing secret meetings with NYU, discussion of a license agreement – they later denied that this discussion even took place, despite the clear evidence – plans for programming of theatrical events and film festivals for “park patrons,” and plans to operate like a full-fledged privatized park conservancy – something they denied was their intention when they came before the public in the insufficient “public hearing” the Community Board held.

Even the change in the way the job posting is worded, conservancy responsibilities mentioned in almost every other sentence, it is very clear what the intention it – despite their statements to the public that they had no such goal.

Let’s keep them from that goal, shall we?

And hopefully, Betsey Ely will not hold up filling the job for nine months again – of course, the appropriate thing to do NOW would be to separate out the two positions so that the public and private do not remain submerged in this increasingly unhealthy relationship.

NYC Park Advocates has learned however that the group’s influence goes way beyond food vendors and reaches as far back to at least the summer of 2012,  a time when the group was privately in discussions with the Manhattan Parks Borough Commissioner Bill Castro to officially form a conservancy.

A year before the group publicly announced its formation plans,  Conservancy founder Elizabeth Ely was on the interview committee to decide the Park Administrator and was instrumental in picking the city employee for the job according to a city source.

The Washington Square Park Administrator job was posted in July 2012, and interviews were conducted over the next few months.
The small four person panel included Manhattan Parks Commissioner Bill Castro and Manhattan North Park Administrator Jennifer Hoppa and Ely.
“The claim that they (the Conservancy) have no influence is ridiculous.  Elizabeth was instrumental in making that decision (on who to hire) ,”  said a city source involved with the interview process.
“They all seemed to defer to her. I was thinking why is this person even here. Elizabeth was asking all the tough questions. It was clear she would be the person working with who ever was hired.”

The job went to Sarah Neilson, a Parks Department employee who now serves in a dual role as the conservancy’s executive director. Sarah was the former chief of staff for Jonna Carmona-Graf, Chief of Capital program management.

“A lot of qualified people interviewed for the job. Sarah was a clerk in the office. She had no park experience, zero,” said a source, sentiments that were echoed by several park employees.

“She was a pet in the front office. ”

The dual role of city employees simultaneously holding a Park Administrator job while serving as the non-profit’s Executive Director has repeatedly raised conflict of interest issues but the city under Mayor Bloomberg and then Parks Commissioner Adrian Benepe have merely blown the concerns off.

In public, a year after the Park Administrator interviews, Elizabeth Ely conveyed the party line. “We have no plans to run Washington Square Park. The city runs the park,”  Elizabeth Ely said at a Community Board 2 meeting formally announcing the group’s creation.

Commenter ParkUser recently wrote here about the conflict of interest:

Having the Park Administrator also be an official of a private conservancy is the lynchpin that lets Parks operate an untraceable backdoor to private interests.

Official Parks policies control the circumstances in which Parks employees may interact with commercial interests. Things need to be on the record, certain types of interactions are banned.

Not so with a Park Administrator who has ‘two hats’, one government, and one private conservancy. The private hat lets Parks interact with commercial and rich donor interests in a venue that deliberately evades official policy and ethics standards by being a private organization making its own rules of interaction without regard to public requirements. It lets those discussions occur without any record or limitation.

This lynchpin needs to be pulled. Remove the dual role.

What I wrote at the time of the first Community Board 2 meeting in June 2013 addressing the possible conservancy:

This all brings up so many questions such as … why should the Washington Square Park administrator, a Parks Department employee, also be the Conservancy “executive director?”

Sarah Neilson, the person holding that position, has been a Parks Department employee for the last 2 1/2- 3 years as a “staff analyst” in the Capital Projects division. At the meeting, she stated that “it makes sense for the two roles to be held by the same person. … [that way we can] share news and events about the park.”

Bill Castro said something similar: “It allows us to have both of them working in harmony.”

Call me confused.If the Washington Square Park Conservancy is mainly working to raise funds and not “running” the park, what’s the big deal about sharing news? Can’t they just send each other memos?

This seems like an incredible slippery slope making it easier for the park to go from having a Conservancy that “just” raises money to eventually running the park. If it’s not right now, down the line.

4 thoughts on “Private Conservancy Caused Washington Sq Park Public Administrator Position to be Vacant for Nine Months | What Will Happen This Time?”