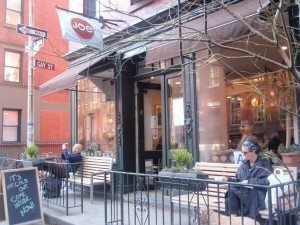 Yesterday, on Twitter, Joe Coffee announced a new location of their small coffee shop chain, which launched in 2003 on Waverly Place, set to settle in near Washington Square Park.

Friends near Washington Square Park and #NYU, we’re bringing you a present in early 2015. One hint: it’s a coffee shop.

Of course, there is no shortage of possible locations – with a plethora of shuttered shops in the Village. They would want a bit of distance from the Waverly locale which is right off Sixth Avenue, and it’s doubtful it will be on West 8th Street (which is so close, and also there is Stumptown). My guess is that it is more likely to be on West 3rd or West 4th Streets, south of the park. MacDougal Street seems unlikely. They do have major competition in the so-called “NYU area” between Think Coffee and Third Rail (Sullivan Street) but, in between those two, there is a good amount of turf they could claim (people want coffee!). East of the park has available storefronts they could inhabit as well and would also make sense based on this tweet.

Joe Coffee (which used to be called Joe The Art of Coffee, so I still think of it that way) has a roasting plant now in Brooklyn and 10 locations in Manhattan and two in Philadelphia. Their coffee is primarily direct trade, organic but not certified (last I heard).

My best guess for this new location is south or east of the park. How about you?