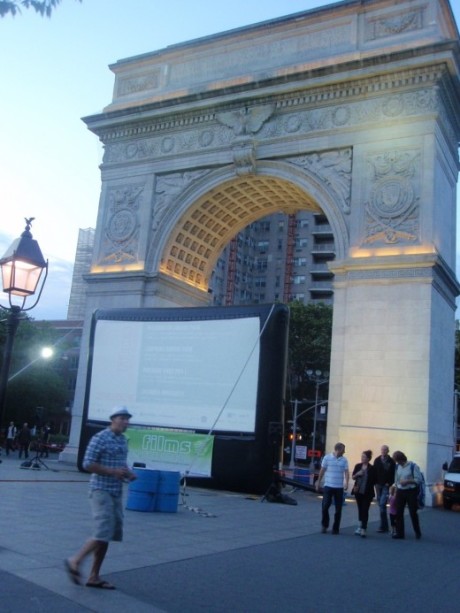 The films are preceded by music programmed by WNYU DJ’s. It is a wonderful atmosphere and the films are screened under the Arch! Movie begins at 8:30 p.m. Come early!

The French “Films on the Green” series began in 2008 in Manhattan’s community gardens and has since expanded to showing ten films throughout the summer at city parks including Central Park, Riverside Park, Tompkins Square Park, Washington Square Park, Brooklyn’s Transmitter Park, and also Columbia University.

Ex-gangster Fernand Naudin is hoping for a quiet retirement when he suddenly inherits a fortune from a former gangster friend, known as “the Mexican”. Unfortunately for Fernand, he must dodge the Mexican’s jealous, trigger-happy gangster buddies, who are determined to set things straight…

Film in French with English subtitles

Starting with a random and absurd stabbing in a deserted métro, the story moves from one murder to the next, bringing together surrealistic and quirky characters. We meet the young, unemployed Alphonse Tram, his wife’s queasy murderer, and a police inspector with an impulse to kill every time he hears a Brahms quintet…

A play on the 1966 Godard film title Masculin Feminin, “Masculin / Masculin” – the theme for 2014 – presents a gamut of colorful male figures in French film—lovers, heroes, gangsters, and rebels. From love to war, and from neuroses to humor, this year’s festival offers the most memorable of the masculin in classic love stories, thrilling film noir, and deadpan French comedies.

Film in French with English subtitles