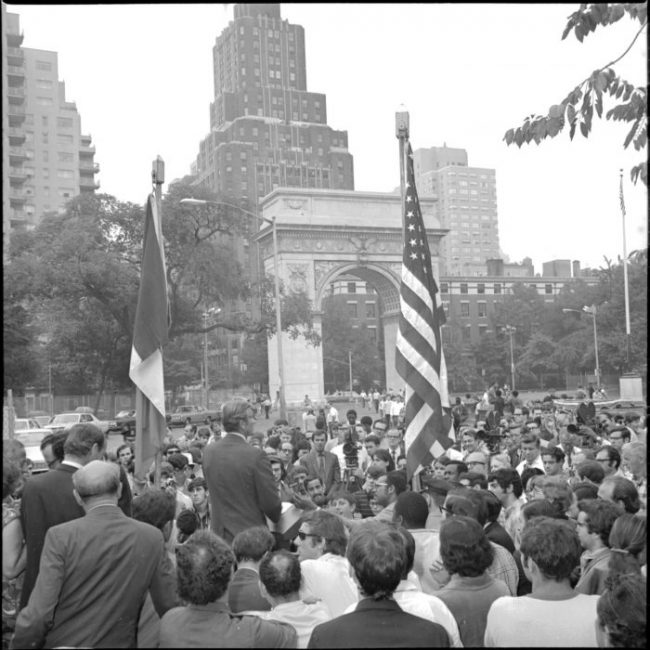 The 1969 renovation of Washington Square Park was completed with the architects asking for – and including – a significant amount of community input into the final design. 50 years ago this month, a major, heralded groundbreaking ceremony was held at which New York City Mayor John Lindsay spoke.

In contrast, the redesign of the park by the Bloomberg Administration (which led to the formation of this blog), with George Vellonakis as the lead landscape designer, proceeded intentionally with a cursory amount of community input. The ‘process’ led to many contentious meetings and lawsuits during the early-to-late 2000s. The Bloomberg Administration wanted their way, no matter the cost.

Fifty years ago, in July 1969, Mayor John Lindsay addressed a crowd at a groundbreaking in Washington Square Park. The renovation project would include lowering the fountain in the central plaza, adding a raised plaza [“Teen Plaza”] in the southeast area of the park, and building three concrete play mounds. “The Mounds,” … in the park’s southwestern quadrant, were for years used for snow sledding in winter, and also by skateboarders …

The New York Times wrote of the previous design in 2017:

What resulted, in 1970, was a masterpiece. A modern, grown-up playground, its unconventional features nurtured how people most loved to use the place: a curvy sculptural landscape, encircled by shade trees, of low platforms and niches that served as spontaneous seats or stages for troubadours, arrayed like petals around a fountain, stepping down toward it to make an urban conversation pit, providing spectacle and sanctuary.

Forty years later, the well-used park was in need of care, but instead got a top-down Parks Department remake. A perimeter fence went up. The sunken plaza was filled and flattened. The leaky fountain — now officially the Tisch Fountain, in honor of a $2.5 million gift from a private foundation — was repaired. But it was also shoved 20 feet sideways from the park’s center and made to line up with Washington Arch to its north, reducing lively counterpoint to relentless alignment. Shapes from Mr. [Robert] Nichols’s composition were weakly echoed in narrow new benches. But the park doesn’t do its job as well as it did, and its remaining energy may be more a testament to indomitable downtown bohemians than to its new order.

I’m sure at the 1969 groundbreaking they did not anticipate that slightly less than 40 years later, this collaborative effort would be redesigned dramatically. ‘
When Phase I of the current redesign premiered in May 2009, it was a less grand affair. No appearance by Mayor Michael Bloomberg, and not as big a crowd. Parks Commissioner Adrian Benepe spoke, as well as City Council Speaker Christine Quinn, City Council Member Alan Gerson and then-Community Board 2 Chair Brad Hoylman.

Work on the three-four major phases took place from late 2007 to 2014+ (technically it was still not complete as the sidewalk reconstruction lingered on for years); the original project was budgeted at $16 million. The work ultimately cost somewhere in the vicinity of $40-50 million.