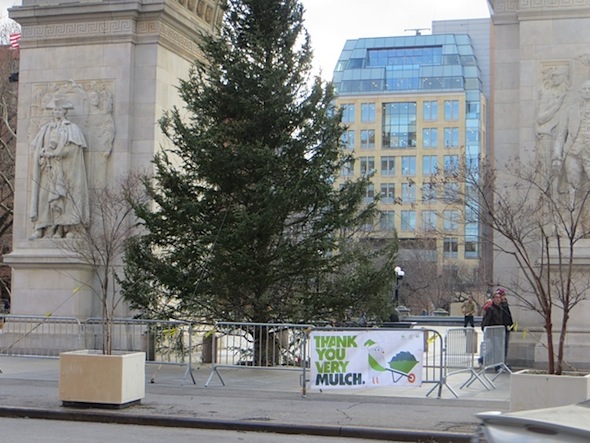 “Treecycle” your Christmas tree into mulch at Washington Square Park this weekend. Trees brought to the park are chopped on site into wood chips and used to “nourish” NYC street trees and plantings and also made available to the public. This is taking place on January 12th & 13th at NYC Parks throughout the city.

(Note: Get there on time. People tend to just leave trees at the park at odd hours!)

Watching the trees sadly make their way through the chipper, I tend to side with Phoebe from “Friends” (*see video below) but this fate is better than ending up in a landfill.

The NYC Parks Department said more than 30,000 trees were “recycled” in 2016; the city agency noted that in 2018 “more than 25,000 trees” were chipped, so the number went down significantly – did less people buy trees or did fewer people “treecycle?” I definitely have mixed feelings on the buying of Christmas trees to then just be discarded although they are festive and do look pretty.

You can find a list of “Mulchfest” locations at the Parks Department web site. Remember to remove lights, ornaments and netting.

Did you know that the Christmas tree from the very tree lighting at Washington Square Park in 1924 was planted in the park in the spirit of “wise use?” You can read about it here.

* In case you don’t get the Phoebe/“Friends” television show reference, watch this:

Check out these great photos of around this time of year MulchFest & park happenings in 2014 here.