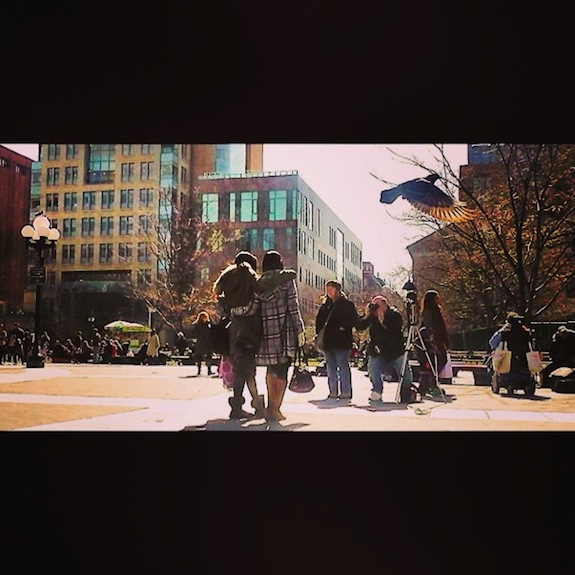 This great photo catches a fly by by one of the hawks – Bobby or Rosie? – as these two women were having their picture taken on the Fountain Plaza. Thanks to this excellent Tumblr photo blog, 2001 Films, for the shot.

The park’s red-tailed hawks have set up their nest again on the ledge of the Bobst Library building on Washington Square South outside the 12th floor office window of NYU President John Sexton. The location is along the southern perimeter of the park. Meanwhile, there are three eggs this year in the nest, according to pondove, moderator of the WSP hawk “chat room.” (There are a lot of ‘inside’ things that go on in the NYC hawk world.) Apparently, the New York Times has opted not to operate the “Hawk Cam” this time after two years of doing so, but, following discussions with NYU, the University has agreed to set one up themselves so viewers worldwide can observe the nest “progress.” It should be operational in the coming week. Click here for some pics of NYU Prez John Sexton watching Rosie and egg(s) outside his window. Seriously, what are the chances that this is where the hawks would place their nest?

Originally, of course, at Washington Square, it was Bobby and Violet (year one). Now it’s Bobby and Rosie (year two and now year three). Pip (child to Violet and Bobby) is gone – I so hope he’s doing well! – and there were two juveniles last year, Boo and Scout (name selection … a bit questionable?).

I hadn’t thought about the hawks in awhile. Looking back at some of the older photos and posts was a bit sad. I was a big Violet fan and Pip was a lot of fun.

In April 2011, near the beginning: Hawks Set up Nest Around the Park — “Violet and Bobby” Videocam Watch

The Parks Department did, as far as I am aware, remove all the rodenticide at the park last year – that has been a good thing.

It’s funny I was not a huge fan of the park’s “new” lighting but, put a hawk on one, and it totally works!