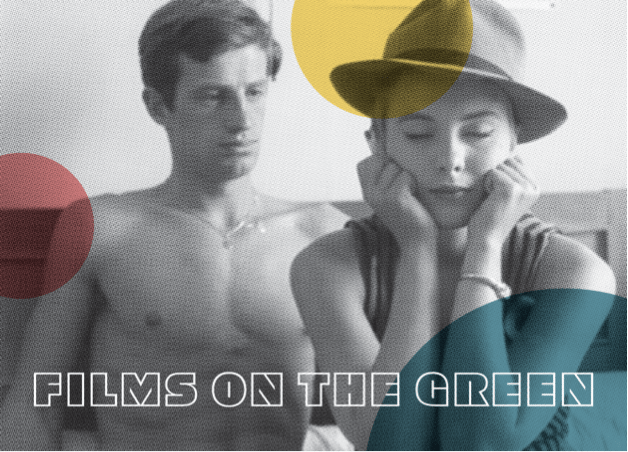 Films on the Green is an annual summer event that has been occurring in NYC parks since 2008 featuring fabulous French films, and it’s free! Two Fridays in June at Washington Square Park. This is always a lovely event to attend!

From Films on the Green:

Our theme this year is “A Summer in Paris” and we will be showcasing the works of Yves Robert and Marcel Carné in the Greenwich Village area—more specifically, at Washington Square Park.

The films are sub-titled in English.

A frothy French farce, The Tall Blond Man with One Black Shoe is a classic madcap comedy about espionage, surveillance and mistaken identity. When Francois (Pierre Richard), an unsuspecting violinist, is misidentified as a superspy by national intelligence, outrageous antics ensue. As everyone (including Mireille Darc, playing a knock-out henchwoman) falls over each other in their misguided attempts to discover the tall blond man’s secrets, his best friend complicates matters even further when he overhears a salacious recording of Francois with his wife. The whole merry-go-round comes crashing to a halt in one final showdown, pitting spy versus supposed spy with hilarious results. Elegantly filmed and accompanied by a memorable score, The Tall Blond Man with One Black Shoe is one of the most seminal comedies of the 1970s.

Paris, 1954. Victor Le Garrec (Jean Gabin, Grand Illusion, Touchez pas au Grisbi), a former professional boxer, runs a gym and works hard to train young recruits to achieve the goals he wasn’t able to reach during his professional career. He feels this is finally possible when he recognizes the potential in André Ménard (Roland Lesaffre, Thérèse Raquin, Casque d’Or), a young railway worker. Victor offers to train him and André accepts willingly, although he soon realizes that Victor’s wife Blanche (Arletty, Hôtel du Nord, Children of Paradise) is not happy with the arrangement. André’s attention is soon drawn away from his training when he starts to have an affair with a wealthy young woman, Corinne (Marie Daëms). In the end, he may have to choose between the woman he loves and his career as a world-class boxer… Air of Paris is a late film from acclaimed director Marcel Carné (Le Jour se lève, Port of Shadows) who pairs two of his favorite actors, Jean Gabin and Arletty.

Check out the full Films on the Green schedule here.

Films run until September 8th in parks throughout the city.

Films on the Green is a free outdoor French film festival produced since 2008 in New York City parks by the French Embassy, FACE Foundation and the NYC Parks.